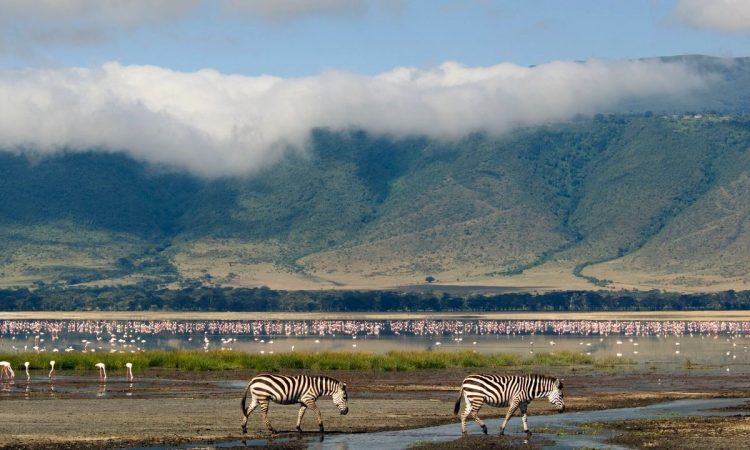 Ten Amazing Facts About Ngorongoro National Park : Ngorongoro National Park is one of the famous parks in the northern-part of Tanzania. It is highly known as a conservation area and it is under the authority of the National Conservation Authority (NCA) not Tanzania National Parks (TANAPA) just because the Northern speaking people, Maasai were viewed as natural conservers of wild animals since ancient times. This led to the establishment of this one of the most attractive areas which is the only conservation area that allows wildlife and human activities to take place such as subsistence farming. It is located in Northern part of Tanzania, Arusha region. So, making it a conservation area and not a mere national park as other national parks such as Serengeti, Manyara and so on.

Ngorongoro conservation area was established in 1959 as the result of the government’s recognition of Nilotic people, Maasai as the natural conservers of wildlife since their ancestral life. That’s why Ngorongoro Conservation Area is not under Tanzania National Parks (TANAPA), It is under Ngorongoro Conservation Authority (NCA). As normal as usual, the Maa-speaking people (Maasai) people were in their journey moving from Sudan in early 1800s to eastern part of Africa searching for pasture and water for their cattle. On their way to Tanzania is when they came to discover Ngorongoro. They were highly attracted with the wildlife in the forest that could favor their semi-nomadic life including livestock keeping. When they reached in Ngorongoro they didn’t find the area idle. There were some people living the place practicing some manual activities just for earning a living. They were mainly practicing agricultural activities for food production. They never produced for surplus. The Maasai decided to drove out from the area people from Mbulu tribe who are believed to exists in the area around about two thousand years ago (2,000). Apart from the Mbulu, the area is said to have been occupied by the Datooga who joined the Mbulu in Ngorongoro around about 1700 years. They were then driven out from the area by the Maasai in early nineteenth century (1800s). the Maasai were very strong and harsh to extent that it was very difficult for the Mbulu and Datooga to resist. There was no any foreign visitor in the region after the Maasai took over until in early 1890s when Oscar Baumann visited the Ngorongoro crater. Oscar Baumann was born in 25th June,1864 in Vienna. He was a famous Austrian explorer, a cartographer and an ethnographer in the German East African colonies. He visited the place doing his professional activities including research exploration in the Ngorongoro crater. In the area, he found the Maasai practicing their activities thus Ten Amazing Facts About Ngorongoro National Park.

Act of practicing wildlife and habitual life; it is the first conservation area in Tanzania to allow both the protection of wildlife and habitation of human being (Maasai). This is just because the Maasai were viewed as national conservers of wildlife since time in memorial. For instance, agricultural activities are highly restricted but Maasai are practicing it only for subsistence levels just to allow the controlling and the prevention of negative impacts on the wild population.

The presence of the most inactive and world volcanic caldera that has not filled; it is believed that the crater was formed as a result of explosion of the large volcano that led to the collapse of it almost about two to three million years ago. This is quite different from other volcanic eruptions such as that of Olmoti and Empakaai that erupted some years ago and are still active.

The active nature of Oldoinyo Lengai; also, the mount Oldoinyo Lengai that had some eruptions in 2007 and 2008 but there are some other small eruptions that are taking place around to fill slowly the current crater.

The presence of archeological sites; the Ngorongoro conservation area is also covered with some archeological as well as paleontological sites. Those sites such as Olduvai Gorge, Laetoli and Lake Ndutu acts as attractive features to visitors who wish to visit the place thus Ten Amazing Facts About Ngorongoro National Park.

The historical and most famous East African Rift valley, the Olduvai Gorge; the Ngorongoro conservation area is said to be the protection of the famous gorge; Olduvai Gorge which were discovered after the discovering of the most and earliest known human species, homo habilis and the Paranthropus boisei that belongs to the Hominidae group. The area of the olduvai Gorge is about 50kilometers long around Serengeti.

Area of Ngorongoro Crater; the crater covers about 610 meters deep (almost about 2,00) feet and the flow covered about 260 square kilometers equivalent to one hundred square miles (100).

The big five; as said earlier, the big five includes lion, rhinoceros, elephant, leopard and buffalo. It is very rare to visit the national park or conservation area and seeing all the big five within a day! But this is possible for only Ngorongoro. Being able to see these big five animals, is the great exposure and just as a good luck that everyone wishes to have.

The 1979 UNESCO Declaration; in 1979 the UNESCO declared Ngorongoro Conservation Area as one of its World Heritage Site. This step has expanded its popularity and attracts more foreign visitors to visit the crater since there are very few sites in the world that has been declared by the United Nations Educational, Scientific and Cultural Organization (UNESCO) as world’s heritage sites.

There are modern and luxury lodges in the conservation area. Some of them are located around the crater which experience crowds of people annually. Being accommodated in these luxury lodges gives a great opportunity of seeing the crater and its beautifulness more easily thus Ten Amazing Facts About Ngorongoro National Park.

You are highly advised to visit the area during the dry season (from June to September) when you can be able to view the wildlife best and more easily since they stay in gatherings or groups. Also, one can visit the area between March and July expecting to see crowds of animals.

How to Reach Ngorongoro Conservation Area?

It is a walk of not more than three hours journey from Arusha region using car.